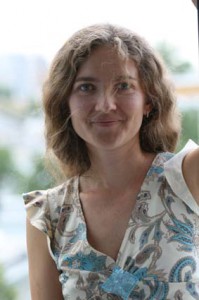 is an artist, a journalist, a designer, a landscape designer, a well known creator, an art dealer and a producer. She was one of the first who started of Russian public art progress.

Ekaterina’s projects aim is creativity. She has an experience of work in different public, urban and natural areas. Ekaterina brought to life numerous art projects and eco festivals. The most interesting projects were “Line” where she organized the redubbing of the Sokolniki line of Moscow Metro by Russian actors,” Bench of the World”, the cycle of projects ” Harmonization of the space” and series of projects in the field of philanthropy, including “Miracle Day at the Tretyakov Gallery”.

Thanks to her creative ideas, she led one of the best radio stations of Moscow “Radio 7 on seven hills”. The establishment and promotion of STS. She was the head of special projects “Publishing house 7 Days” (invented projects for magazines of the publishing house to raise their readers’ rating). Was editor of the news magazine about design and architecture “Design is illustrated” as well as the chief editor of the magazine “Shtab kvartira”. She has extensive experience in the design and exhibition projects and she has experience in the publishing and printing activities. She has restaurant experience – art Director of the restaurant Nostalgie, the author of the project “Shatior cafe” (Startup from idea to implementation and PR promotion)

Graduated from the Moscow State University, majoring in journalism, Independent school of sommelier Winepeople professional course for sommeliers and Kavita, School of design “Details”, course on “the Design of the exterior and outside environment”.

She used to be an art director of the Russian Champagne brand “Abrau-Durso”. This champagne brand organizes the annual art festival of landscape art, the festival of Russian Wines and other cultural events in the south of Russia. Developed and launched one of a kind international summit wine Abrau-Durso. The summit annually attracts winemakers from all over Russia, wine critics and journalists, foreign wine experts. The summit is of colossal importance for the wine industry in our country. Developed the concept of tourist attractiveness of the urban environment for the city of Nizhnekamsk, Tatarstan. Developed a festive installation for traditional holidays, such as Maslenica in Moscow. And other projects.